The Case for a Shoe Connection


It is about time that I admit it.  Really, I have to stop denying it and come clean.

Yes, my brown casual shoes are pretty much dead. 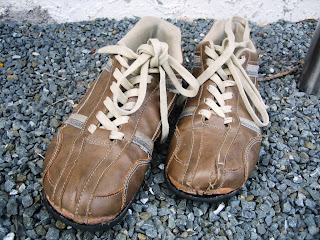 They were bought as a pair of disposable shoes before a trip to Europe about 3 years ago, and I never expected them to last the trip.  The fact they survived (barely) an ill-advised trek up amongst the steep snow-strewn pathways of an "easy-to-intermediate" Swiss mountain was nothing short of a miracle - and the looks some of the Swiss gave me on my trip, on espying my shoes, indicated that they also thought my survival was something I should be thanking the deities for.

However, after that trip, I took a (metaphoric) shine to these shoes.  Sure, the laces were long and prone to unknotting at the most impractical of times; they were not terribly waterproof (though, being fairly thin, they dried out incredibly easily); and the grip they provided was tenuous at best - but still.

And so, they came with me on trips to South East Asia, and around New Zealand.  And they survived, though some of the threads started to fray and, by the start of this year, the soles of the shoes had started to fall away, turning them kind of into reverse jandals, and in the most dangerous way.

Thus, the shoes entered semi retirement this year, and now, with the purchase of a replacement pair, they may finally be retired to the big shoe store in the sky, with all the other shoe-y soles (argh!  Bad pun; but I had to).

And so, before they are laid to rest, an ode:

An ode to my shoes (RIP)

Oh, shoes
I shall miss youse
No more shall we walk together
With your tan laces and fake brown leather
Our paths diverge, yours and mine
As I abandon shoes that have lost their shine
Rest thee well, my faithful loafer
Now that, for me, your job is over.

The Case for Guaranteed Safety

There were several reasons I wanted to go and see Safety Not Guaranteed.

The first hook was the promise of a quirky film.  I love those sorts of films.

Then there was the promise of the cast delivering the aforementioned quirkiness.  This was not a vast collection of ultrafit superheroes in skin tight costumes (not that there is anything wrong with that), but a small assortment of kooky actors the majority of whom I recognised from some of their work on the small screen.  First off, the awesome Aubrey Plaza, mostly seen in Parks and Recreation, putting her sour, youthful looks to good use here as intern Darius.  Then there is the also awesome Mary Lynn Rajskub, who has been a bit all over the place really but whom I think is wonderful wherever I have seen her.  And thirdly, the loud and brash but completely likeable Jake Johnson as Jeff, playing almost exactly the same character he plays in The New Girl except this time his character has a job.

The quirky story starts when Jeff takes interns Darius and Arnau (Karan Sani) to a small town on the coast to track down a local man who is looking for a partner to take with him back in time.  They find the quirky Kenneth (Mark Duplass) working in a local convenience store, and Darius takes on the mission of getting closer to him.

At first, it seems a fairly family friendly premise, and there were several families at my screening - though I did wonder what the parents thought of the fairly colourful language Jeff is wont to use.  It is actually quite jarring to hear Jeff curse like a trooper, as every other character seems almost allergic to using harsh language, but it works for the character despite that.

The film is full of little triumphs and little poignant moments.  And of course Plaza's huge, judgemental eyes.  With all those rewards, it was pretty easy to overlook the fact that... well, that the facts really didn't add up in the end.  Jeff's reconnection with a high school sweetheart is a very, well, sweet interlude, but it doesn't really go anywhere.  As to the timetravelling, that is something I really shouldn't even try and hint at, so I won't.

Nonetheless, despite it ending a bit messily, I have to say I enjoyed the film.  I can't say I enjoyed it immensely, as it doesn't really work or pretend to be on that scale.  Safety Not Guaranteed seems very happy to be a small film with small ambitions.  And there is nothing wrong with that.

Verdict: Safety Not Guaranteed doesn't really take a huge amount of risks, with a great comedic cast and a winning sense of whimsy.  It all plods along slowly, assuredly, though in the end, I was a little bewildered as to where we ended up.  8 wanted ads out of 10.

The Case for Dredd Locks


I can't say anything bad about the new Dredd movie, starring the jaw of Karl Urban in the role made infamous by Sylvester Stallone in the last movie outings.

That is, of course, not to say that this version is a brilliant film.  It's pretty grim, fairly serious, and there isn't  huge amount of character development or any real sort of plot.  But that is kind of the point. 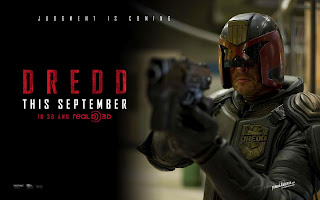 Dredd is not about an incredibly complicated and involved storyline, with a rich history steeped in mythology or having to reference the real world.  It's all about a bleak, post apocalyptic world where the law needs to be taken into the hands of a few for any semblance of order to exist.  And the most sturdy, incorruptible hands belong to the man who never takes of his helmet, the Judge called Dredd.

And the film works because Dredd himself does not learn, or grow, or emote, or do anything namby pamby.  Dredd is there to dispense justice in the most violent and explosive way possible.  And so, in this version at least, he does.

Character development and emotion is left to other characters in the film.  Dredd's partner, Anderson (Olivia Thirlby) is learning how to be a Judge and so its through her eyes we witness the depravity and violence of the future.  On the other side of the law lies Lena Heady, honing her evil skills that she wonderfully uses in Game of Thrones and killing lots and lots of people with a minimum of mercy and a maximum of firepower.

The only problem with the film is that, at times, it all goes a bit slowly.  For most of the film, the two Judges make their way through enemy territory dispensing justice in the most deadly way possible.  Which is fine for the most part, but when things aren't being blown up, the pause does give one time to reflect on the fact that they are still not near the end.  The fact that the drug of choice in the bleak future is one that slows down time for the user - and for us, as we are shown the very pretty effects of the drug-induced experience - also adds to the sense of easy slowness.

I think I was also a little distracted by some highly irritating cinemagoers behind me who seemed to have an unlimited supply of highly rustle-able bags and another unlimited supply of meaningless banter.  Grrr.  And no matter how hard I telepathically signalled to the Judges on the screen, none of them came down and mowed down the offenders in a hail of futuristic bullets.

But despite the slowness, the film itself was everything that a Dredd film should be: violent, straight forward, no nonsense and stubbled.  Urban is just awesome, as is the rest of the cast, and unlike Stallone, its obvious there is no Stallone-sized ego to get in the way of what the film should be. As much as this film is about the Judge, Dredd is just the steady core around which everything else happens, and Urban is solid, gritty and rock like - just as Dredd should be.

I have no idea if a second film is in the works, but it would be interesting to see any such plan would involve developing the character of Dredd, as really, that would probably ruin it.  In the meantime though, I will revel in the shallowness of this incarnation.  Sorry Stallone, Urban is the Law.

Verdict: Dredd is a shallow, violent piece of cinema, thankfully.  If you like your movies full of explosions and cynicism, this film is great.  Just try not to go all Judge-Mental if other people in the cinema don't view the film with the right level of respect.  7.5 laws out of 10.

The Case for Perpetual Loops


Looper, starring the awesome Joseph Gordon-Levitt doing a superb impression of his "older Joe self" (Bruce Willis), has got rave reviews.

And it is a really impressive movie.  Bleak, depressing, with a few tricky twists, turns and tricks along the way to keep you guessing and entertained.  Unfortunately, it is also one of those movies that you can't talk too much about.

What I can say is that Gordon-Levitt is fantastic, Willis is himself, Paul Dano is bloody irritating and about halfway through Emily Blunt shows up with an American accent to provide a bit of class.

I can also say that I am not as big a fan of the movie as the majority it seems.  When it comes to time travel stories, I am particularly fussy, and as much as it is amusing when the characters say "I can't explain it because it is too complicated", I am not a fan when that is the magic verbal wand that is swished about to explain things that, really, make no sense whatsoever.

But I won't go into that here.  No, I will just say that it definitely kept me entertained most of the way through (I thought the end was a bit of a disappointment, truth be told) and Gordon-Levitt once again is brilliant.

Verdict: Looper is not really a lot of anything new, but is done really well with a (mostly) amazing cast. 7 temporal anomalies out of 10.