The Case for Being Gone

I have to admit, I was a little unsure about going to Gone Girl.  The preview just made it look like it revealed everything, and if it didn’t, I was going to be mightily annoyed if it all ended up being a dream or some other twee twist.

But based on a glowing review on one of my favourite podcasts, Kermode and Mayo’s film Review show on BBC Radio 5 (or is that BBC Radio 5 Live?), I was persuaded to give it a try, and off to the Lighthouse Cuba I went to get the session with the best time, considering the film is around two and a half hours long.

And I can’t say that time didn’t drag a little.  I was a little worried as the film progressed that it was dragging its heels a little, and so I looked a bit nervously at the time to ensure I would catch the train I had anticipated.

But despite that, the film was actually rather amazing.  Ben Affleck is brilliantly cast as the roguish husband who may have killed his wife.  He has an easy charm that lends itself to a man who is a bit narcissistic, has a lazy smile that you can see would be charming to the ladies and a bit sleazy at the same time, and is more involved in thanking those who are helping him in the search than getting all tangled up in grief over her disappearance.  Likewise, Rosamund Pike as Amy is beautiful but a bit cold and stand offish as their history is relived through her diary.  And the rest of the cast is outstanding as well, though it is really Affleck who holds the film together.

If you have read the book then you know the outcome and I will not go into it here, as part of the fun is discovering things along the way.  Suffice to say the twists and turns are all very exciting and engrossing and the entire audience was all very chatty about it afterwards.

Overall, I realised I had thoroughly enjoyed myself in the end by the fact I too was running through what had occurred, trying to find loopholes, trying to find things I could disagree with.  In particular, the way the media in the film picks up on the disappearance and then turns on Affleck’s character has been identified as being critical of today’s real-life media and news services, with their uninformed “experts” and the power of major and minor TV presenters to sway opinion by presenting a particular point of view.  This is all in the trailer, so I am really not giving spoilers away on that point.

But in case I do reveal more than I should, I will wrap this up quickly – unlike the film itself.

Verdict: David Fincher has made an excitingly nerve wracking thriller that brings out amazing performances from Affleck, Pike and the whole Gone Girl cast.  I laughed, I was angry, I was deceived… I enjoyed it immensely.  9 ties out of 10.

The Case for Sinning in the City

I can barely recall the hype around the first Sin City movie as it was so long ago, but I recall it had a lot to do with the shockingly violent stories, the innovative animation style visuals, and the stripper who keeps all her clothes on.

The second Sin City: A Dame to Kill For movie did not come with the same amount of positive hype, and so I went along to it more out of a sense of obligation to it than any real anticipation of anything good.

And I was not disappointed, if that is the phrase one should use when not really getting something good when you expect it.

The film had violence and style and good actors and the like (I have a soft spot for Mickey Rourke and Joseph Gordon Levitt), but it just feels so… dated.  Films like 300 have raised the bar on blending live action with animation; movies like the Raid have upped the violence ante; and twisted revenge storylines are par for the course for almost every other television series.  So the second Sin City movie really needed to up the stakes one way or another to be relevant and exciting.

And it failed miserably.  It was probably even a step back from the first film, with only occasional flashes of fun and excitement in amongst the grimness and the illogic.

At least Eva Green has a lot of fun, or at least almost as much fun, as she had in the second 300 film.  Its great to see Mickey Rourke back on the screen too, but he is more peripheral to other people’s stories than master of his own, so there is no real opportunity to connect to him.  Plus, the editor made some interesting choices, wrapping the JGL story that takes 48 hours tops around a story with Josh Brolin that takes weeks if not months, which annoyed me more than anything else. 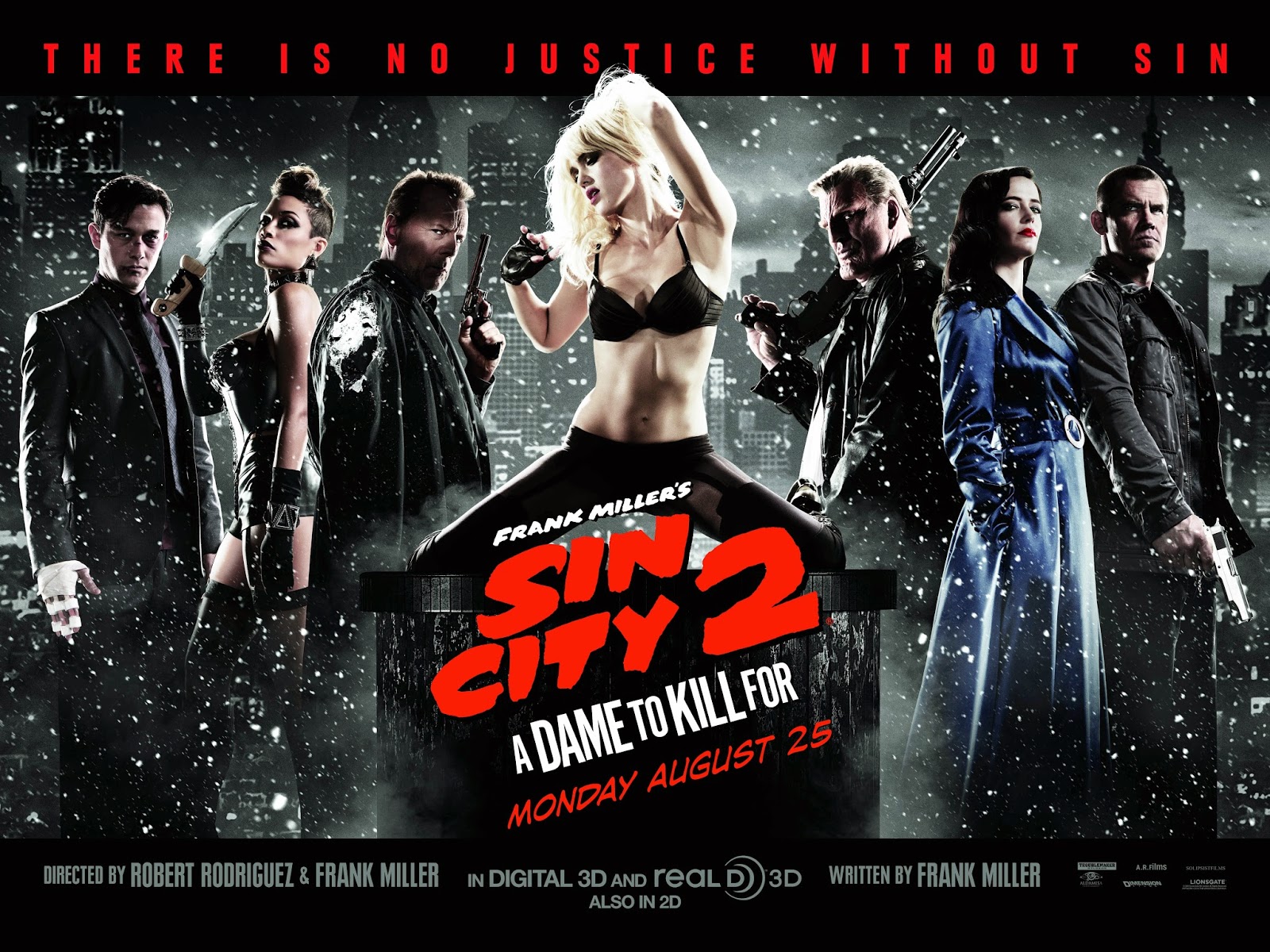 Overall though, I didn’t come out railing against the film or particularly upset.  I suppose there wasn’t enough expectation in the film for me really to worry too much about it.  Shame really.

Verdict: Sin City: A Dame to Kill For was decidedly underwhelming on all fronts.  A sequel to a movie that no one was really crying out for , with weaker stories and no real innovation.  Despite a great cast, the film really failed to capture my imagination, even if it did capture my interest from time to time.  5 splashes of colour out of 10.

The Case for Boyhood

One of the films I failed to see at the film festival, as it was totally sold out by the time I came to buying tickets, was Richard Linklater’s latest release Boyhood.  This nigh 3 hour long film has earned much kudos and praise.  While the story itself might be straightforward enough and wonderfully told, the more ambitious aspect is that it was all made over the course of 12 or so years, with the central character, Mason Junior (played by Ellar Coltrane), literally growing up before our eyes.
In the early years, we tend to just follow Mason as he exists in the lives of his parents, played by Rosanna Arquette (whose hairstyle changes as the seasons of Medium, presumably being filmed at the same time) and Ethan Hawke, and to cultural references like the music of the time or video games and television.  Mason Junior’s parents are divorced and so take their children (Mason and his sister, played by Linklater’s own daughter, Lorelei) on different journeys: with Dad, the kids have fun and lead a fairly playful lifestyle; with Mum, life is less frivolity and more nuts and bolts, with moves and relationships and homework.

As Mason Junior gets older, he becomes a more active participant in the film, the story beginning to be able him rather than more being on about events that happen around him.  He discovers booze, bragging and girls (not necessarily in that order).  He discovers a love of and a knack for photography.  He gets a job, gets a car, and gets quite a few haircuts.  He deals with girlfriends and inlaws and step relatives.

Arquette has a lot of heavy lifting to do throughout the course of the film.  She has several relationships, mainly to alcoholics (though the common factor tends to be her; is she the cause of their addiction?), and goes back to school to get herself her dream job.  She has to portray the loving mum, the driven career woman, the relationship seeker, and the breadwinner.  And she does all of these incredibly well, being funny and dramatic and understated and loving, not always at the same time.

Hawke meanwhile flits in and out of the story, eventually appearing with a criminal porntache, signalling when he is no longer the cool Dad and has turned instead into the boring husband.  His sections also tend to bring the most laughs: from a birthday with bible thumping inlaws to setting up billboards for Barak Obama during his first run for the Presidency.

With both of these actors, you know you are getting great performances.  From Coltrane, though, it is very hard to determine whether the quietly confident yet sensitive soul portrayed is entirely an act, or if it is fairly close to Coltrane’s real life personality.  How much is he bringing to the movie, and how much is the movie imparting on him?  There is no interview afterwards to show what his “true” personality is like, and so the question is kind of left hanging, even if it isn’t really a question the film promises to address, or even poses.

One cannot say this film is rushed, but considering the mammoth effort it took to put the whole thing together, and the fact the film is meant to reflect a “real” life, it is enjoyable and engaging throughout.  And thinking about the logistics of it all, that just always blows my mind.

Verdict:  Boyhood is a visionary film.  The storyline may be one you have heard a thousand times before, but the sheer audaciousness of following the same actor over 12 years to show time passing and to show how life happens is incredible.  10 haircuts out of 10.