Jurassic Park back bigger and better than ever as Jurassic World.

A huge budget, mammoth monsters, Chris Pratt – this film is wheeling out the big guns (especially in Pratt’s case) and showing them off to the crowd (I was going to say “firing into the crowd”, but that would be taking  the metaphor a bit far).

20 years after the original doomed park, the new island attraction is open and doing bonza business.  But not enough.  Its time to get bigger and scarier and more out of control.  Give the masses the opium they want!  They want teeth and daring and action and monsters chomping on action people!

And the movie delivers by making everyone on the island insanely stupid, power hungry and stupid, smart but in a powerless position, or (in the case of our hero) always right but never heard until everything hits the fan and then can save everyone.

I have to say, that kind of movie irritates me.  I can understand disasters and the like, but the human-caused contrivances that propel the plot provoked outrage within me, not joy at the carnage such dumbness would unleash.  Not so the rest of the packed TitanXC audience, that were rubbing their hands and salivating and talking to each other in not so whispered tones (I am looking at you, evil women in front of me!) in anticipation of the coming slaughter.

It takes its time to get there.  There are a couple of kids whom we follow through the park’s attractions, and whom I was hoping would get eaten within 15 minutes of their appearance, especially the older Lothario brother.

Their aunt, played by the extreme asymmetrical bob of Dallas Bryce Howard, runs the park in high heels and is a hard nosed cow who somehow transforms into a heroine of some sort.  At least, I think she was supposed to but I never really warmed to her.

While she and Pratt are off with the main story, I was more interested in the control room plebs, including the awesome Jake Johnson and Lauren Lapkus who don’t get nearly enough screen time despite their awesome t-shirts and more interesting characters.

But then the point of the movie is the dinosaurs, and when they come into play, the plot holes and the uninteresting characters and all the things I might not have fully appreciated fell away and I got totally lost in the experience.  Jaws and teeth and screams and runnings and big things… totally impressive to watch, totally amazing to appreciate.  The humans get in there occasionally and do stupid things and get themselves blown up, but the dinosaurs rule the screen, and are a definite reason to see this at the movies.

Verdict: Jurassic World is big and dumb and everything I expected from the trailer.  Not surprising it is doing bonza box office, but this visual treat has a “barely trying” storyline in there. Worth seeing on the big screen, but I doubt I will watch it again.  6 unfeathered velociraptors out of 10.

The Case for She Spies

And, surprisingly, in Spy, he is absolutely hilarious too.

But Spy is very much McCarthy’s movie, and she holds the whole thing together despite its unnecessarily long 2 hour running time.  From back office off sider to Jude Law’s CIA James Bond character, she becomes a field Agent keen to track down Rose Byrne and her insane hairdo in order to save the world.  Kind of.

There are lots of swings and roundabouts and ups and downs in this film, but you can’t deny that McCarthy’s charisma holds the whole thing together.  Even if Hart seems to be a visitor from the set of Miranda rather than a character written for this movie, she still brings a few guffaws and it is McCarthy that makes sure Hart’s performance stays a part of her film.

And then there is Statham.  Statham the revelation.  Playing up on his hard man with the hard abs image, Statham’s overly macho character slowly turns into a mickey taking caricature of the man of action himself.  And he totally nails it.  Who else could deliver lines about sewing on dismembered limbs with his other limbs than the man who personifies the heart-restarting Crank?  Opposite McCarthy, who plays the straight person to his increasingly insane utterances, he is utterly brilliant.

And there are elements like that throughout Spy that make the film highly enjoyable.  That’s not to say the film is without flaws, as there are some sections that almost had me asleep, so slowly did things unfurl and so weak were the jokes within them.  But then the action gets underway or McCarthy lets loose on Byrne and things look a whole lot brighter.

I have to admit, I was a little worried when I went into this that I would not enjoy this as much as the trailer promised, but I was pleasantly surprised and delighted.  While not all of my companions were likewise smitten with Spy, the majority of the people in the cinema had a great experience, and even the less impressed had to admit they laughed at least 5 times.

Verdict: Spy is a great action/comedy starring some incredible female talent, amply supported by some beautiful male actors who are happy to have their macho images mildly mocked.  Probably not as overall awesome as Kingsman, it was definitely funnier and did not have a questionable scene at the end – well, it did, but it was a funny questionable rather than a “really?” one.  7.5 pussy cat badges out of 10.
No comments:

The Case for Faulty Lines

I was surprised how empty the cinema was for the second week of the release of San Andreas, the latest Rock-starring disaster flick all to do with earthquakes and heroes and Californians perishing to fiery deaths.

And then I saw the movie.

Dwayne “The Rock” Johnson is as charismatic and charming and big as ever (though the fact he didn’t wear a skin tight UnderArmour t-shirt was a little surprising) and he is the main man, an ex soldier “retired” to a life for Fire Service rescue helicopter operating.  He is estranged from his wife, the kind of estrangement that only some super heroics during a natural cataclysm can resolve, so fortunate for him, California is about to fall into the sea.

Well, not quite.  Paul Giamatti is about to look serious and give important warnings about the earthquakes, each stronger than the one before, that are going to turn the West Coast cities to rubble.  His role is to look worried all the time, and he does, while his buff colleague goes off and does the exciting heroic things, and his student assistants look young and pretty and play with computers and tap into things that don’t really require tapping into or, in the case of a major seismic event, would probably not work that well anyway. 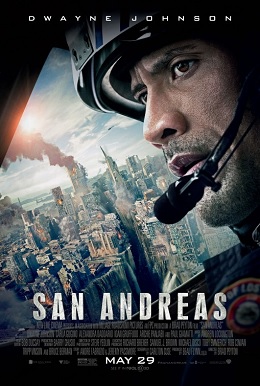 But the real star of the show is the Rock’s incredibly tanned (but white?) and blue-eyed daughter, about to go to College / University, and last seen having a good time with Woody Harrelson in True Detective.  Blake (played by Alexandra Daddadrio from the Percy Jackson movies) is every inch her father’s daughter (they may have the same cup size?) and takes charge when things go down in San Francisco, saving two English brothers who for some convoluted reason came to San Francisco from the UK when their parents were on a tropical cruise, and one decided to go for a job there.  As you do.

So, those are the players and the backdrop is a natural disaster.  But it’s a bit hard to get involved with any of them.  The disaster is quite generic, the destruction impressive in scale but basically ends up “building falls down” for most of the 2 hour running time.  The Rock and his Estranged Wife are busy having heart to hearts as the Rock abandons his job as a rescuer and basically steals his work helicopter to go and find his daughter, rescuing members of the public only once in his trip, and otherwise ignoring them or running them down with the various conveyances he uses to get to San Francisco.  And as for the daughter and her band of merry men… actually, they are okay, though the younger brother gets a bit annoying after about 5 minutes.

So, in the end, it’s hard to really care about the characters, not helped by the very unimaginative perils that the family face.  There is no tension to the movie as there is no doubt as to who will live and who will die (though I won’t spoil the non-spoilers here), and the most exciting rescue takes place at the start at the Hoover Dam and basically without any of the family present.

There is some amusement to be had, however.  The Rock is a screen presence that is hard to resist, and Kylie Minogue and ex-Kiwi Simone Kessel show up for a few minutes, though Kylie actually gets to speak.  There is also a good deal of ethnic diversity on screen, though the scale feels a bit like someone was ticking boxes in the back office.

But overall, the film didn’t have anyone on the edge of their seat, or exclaiming with surprise or relief.  It just had an audience that came, saw and left, and there wasn’t too much else to say.

Verdict: San Andreas is a generic disaster flick that totally fails to inspire much thrills or any tension and is saved only by a fairly competent and likeable and quite attractive cast.  I have seen worse.  6 richters out of 10.