The Case for New Guardians


Okay, so Guardians of the Galaxy.

From the incredible 80s soundtrack (oh yes, more please) to the lighthearted nature and occasionally surprisingly disgusting jokes (did I understand the "blacklight in the space ship" one correctly?), from the impressive visual effects to the highly engaging cast (is Chris Pratt the perfect imperfect hero?  Is Zoe Saldana the ultimate bad ass?), it all works to deliver the ultimate in popcorn thrills.

And, like most popcorn movies, I have no idea what is going on.  There is some kind of story involving Kree who are fighting the Nova who have no real space military to speak of but have somehow managed to defeat or at least contain the Kree forces and are seen as a balancing force in the galaxy.

Into this comes a rag tag band of misfits: Star Lord, Warrior Princess, Tree with limited vocabulary (and hilarious to boot), literal strong guy, and irritating raccoon (not my favourite, I have to admit).  They are fighting for truth, justice, and the Nova way.  And money. 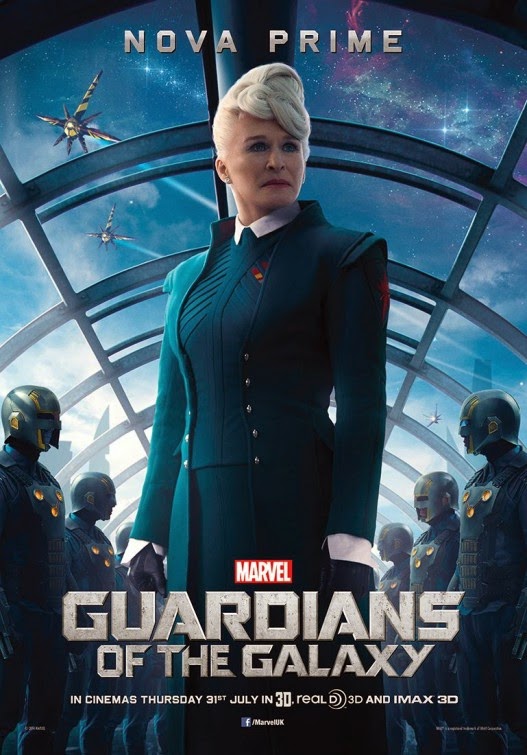 I was also aware that Karen Gillan, the wonderful Amy Pond from Dr Who, was involved in the cast too, and, shorn of her beautiful fiery tresses and covered in make up and prosthetics, it took me a while to figure out which one she was - an indictment on my powers of observation, I have to say.

At any rate, even if the story is insanely silly, the movie itself is brilliant.  There are the odd Marvel tie ins, but, without the need to ground it in Earthly reality, the film is able to go completely crazy and not worry about bigger pictures or continuity or anything like that.  All it needs to do is be fun and entertain, and it succeeds wonderfully.

Verdict: Guardians of the Galaxy is a marvel of visual entertainment.  Light, fun, and even with a two hour running time, it doesn't outstay its welcome.  More please - and there will be in 2017.  10 Infinity Stones out of 10.

The Case for Gisborne Knights


The Dark Horse came out as pat of the International Film Festival, but it was released shortly thereafter as a general release and so I was able to see it in a “normal” session at the Lighthouse Cuba as the IFF itself continued on.

First off, things I learned about Gisborne: when it rains, it rains hard, as if someone had turned a fire hose on, though even the rain is a little afraid of falling on a gang party.  The Police seem fairly absent as well, unless called upon by white Mental Health nurses.  And I also learned that adults don’t really seem to care about other adults, though they love caring about kids – not that there is anything wrong with the latter, but the former seems a bit cruel.

The tale follows the “real life story” of Genesis (a pudgy Cliff Curtis), recently released into his gang leader brother’s care from a life in an institution for the mentally unwell.  A chess champion in his youth and truly obsessed with the game, Genesis joins a club for wayward youth run by a friend of his to teach the kids how to properly play chess and taking them to a championship tournament in Auckland where they can compete against “the best in the land”, or somesuch.  Against this backdrop, Genesis has to deal with his nephew Mana being inducted into the local Vagrant gang, a prospect his father is intent on making happen while Mana seems less convinced.

It’s a really good story, told mostly very well.  Curtis is amazing as Genesis, and the rest of the cast carry their roles really well too.  The cinematography occasionally veers into shaky vision territory, and the music is an interesting mix of music across multiple genres, and overall it comes together pretty well.

Its actually more the way the story evolves that makes things feel a bit manipulative.  Mana’s father arrives about 5 minutes after a critical moment has past even if it means he had to travel about 5 hours to get there; as mentioned, Genesis fragile mental state is well known but his so called “friends” leave him to his own devices when it seems pretty obvious he would not be handling things well at all; and a scene where Genesis’s fitness to be around the troubled youth comes and goes but left me wondering, “which kid’s parents had the problem again?” as it all seems to disappear as inconsequential a few minutes after it is raised.

There are no real surprises either as the story slowly unfolds.  This is a lot like most mentor films, where an older person brings out the best in the youths under their care and in the end finds redemption themselves as well.  The mildly surprising part though was that the fate of the kids was not revealed – we got the usual “this is what happened to” follow up slide for Genesis, but the kids are just dismissed with a blanket “they had better lives”, which seems a bit unfair and conspiratorial as well.

Nonetheless, the film itself is funny and touching and moving and well put together, so there is very little “wrong” with it.  It does run in at about 2 hours long and I think could have used a bit of a trim too.  I would also love to know where the house was that the chess club stayed the night in Auckland, with the most superb view of the downtown skyline at night I think I have ever seen.

Verdict: The Dark Horse refers to the characters, not the film making style or the way the story is told, which is pretty straight forward.  But its done very well, with a great main character in Genesis, and an incredible actor in Cliff “Uncle Bully” Curtis.  And the oldies in my film were very happy with it too – as I heard whispered quite regularly throughout the Lighthouse screening…  7 pawns out of 8.