The Case for the Red White and Blue Dawn

The fight of the century of two of the greatest superheroes ever.

Of course, considering the power differential (Batman is a human; Superman’s powers are godlike), there was really only one outcome, and the film forces Supes to hold back to make the match anywhere near “even”.  But then, Supes really didn’t stand much of a chance anyway. Because the film’s director, Zac Snyder, doesn’t really give Superman (played by Henry Cavill, all muscles and frowns) a hell of a lot to do. This film is nominally a Superman (and I can’t really say “Clark Kent” because there is even less of him) sequel, but the director has a lot more fun and intrigue with Bruce Wayne (Ben Affleck is a great Bruce, and Jeremy Irons is all dry and cutting English vowels as Alfred Pennyworth) and then directs the Batman action scenes with style, flair and quite a few deaths.  Likewise, the few times Wonder Woman showed up (Gal Godot still seems a bit too thin for me, but she is definitely a beautiful woman), she is treated more as a James Bond femme fatale than a super hero, and when she finally lets loose in the final fight scene, she is the one smiling and taking down Doomsday, while the boys are off doing their own thing.

The story is a bit of a mess really.  While the aforementioned scenes are great, the overarching story is all over the place, with hints of future storylines (dreary and confusing if you are not fans o the DC Comics universe) and key issues like Superman’s place in the world and his motivations and the reason people might like him not really addressed at all.  The introduction of other potential Justice League members (Flash, Aquaman and Cyborg; you knew this was coming, so its not really a spoiler to say it, though I do hint at something here that may not be evident) is likewise clumsily handled, though props have to be given to those keeping tabs on them for designing logos for each of these future heroes in their mission to document their abilities.

And then the final “how will Batman and Superman team up?” question is answered and… its really dumb.  Not that it doesn’t make sense, its just that… well, nobody would ever do what either of them did given the circumstances.  And more I can’t say because of spoilers.  But trust me: dumb.

While Batman’s mano a mano fights against baddies are totally awesome, the big fight against Doomsday is a little less successful.  Its still violent and exciting, but Doomsday’s powers of energy pulses (or whatever it is) are a bit overdone.  Doomsday’s origins though… sigh. 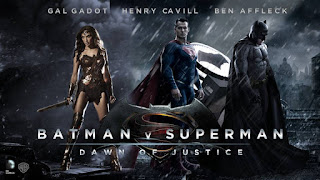 Slightly more successful than I thought it would be was Jesse Eisenberg as Lex Luthor.  Well, he is an ADHD genius with Daddy Issues and a real lack of social skills, which is not quite the Lex Luthor I was expecting.  I was thinking more a suave manipulative super genius, but Eisenberg is going for near Joker levels of ticks and mannerisms.  So, while he is utterly annoying, as a villain, it kind of worked for me.  Not that I want to see any more of that character ever again.

So, I have concentrated above on the bits that didn’t work for me, but it has to be said that during the 2.5 hour running time, the majority of the film was spent following Batman and Bruce Wayne and that actually worked really well.  The opening scenes in particular are incredibly effective, as they illustrate and crystalise Wayne’s distrust of Superman as he runs around the tumbling towers of Metropolis trying to save lives while Superman battles his fellow Kryptonians in a flashback to the final fight in Man of Steel.  And any of the scenes of Batman as “James Bond”, bringing his famous (and oft neglected) detective skills to the fore rather than using hi WayneTech gadgets, are also quite fun.

But as a coherent movie and its overall “goodness”… I am afraid I am less convinced.

Verdict:  Overall, Batman v Superman: Dawn of Justice had a lot of good points and was far more successful than Man of Steel.  But its still not a great movie.  Roll on the Wonder Woman movie though!  3 peach teas out of 5.

it’s very amazing. Thanks for it.