The Case for the Parrot and Shihad

I have to admit in advance that I am not the biggest Shihad fan.  An iconic Kiwi band they might be, but their music is a bit... harder than I usually go for.  But, nonetheless, there are a few of their songs that resonate within me, and it turned out there were quite a few more that I knew that I had anticipated. 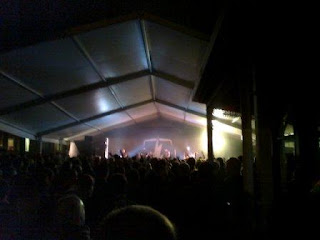 The venue for this gig was the Station Village in Petone, and it turned out to be an open air affair, with the stage sheltered by a tent erected between the two bars that form a small, slightly uneven enclosure.  I had initially thought that the concert might have been conducted in one of the function rooms, but was relieved to discover that we would not be squashed together, and the weather was kind enough to provide clear skies and a (almost too) cool breeze to keep things fresh. 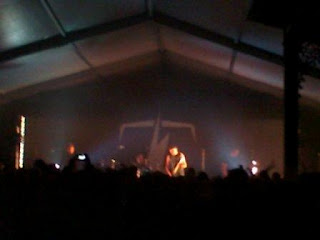 The queue to get in moved along apace, most attendees clad in a black t-shirt emblazoned with the name of their favourite heavy metal band, or of Shihad itself.  I had bought tickets online only the day before, but a big blackboard out the front of the venue proclaimed that this was a sold out session. However, I met a person inside who had come without the joy of his girlfriend and, intoxicated before the band even came on stage perhaps depressed by his girlfriendless predicament, he bemoaned the fact he hadn't had the presence of mind (or perhaps absence of mind) to think of scalping the ticket on the way in. 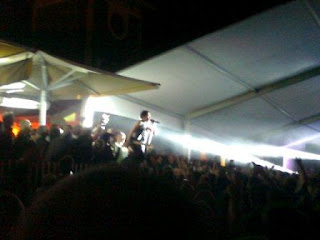 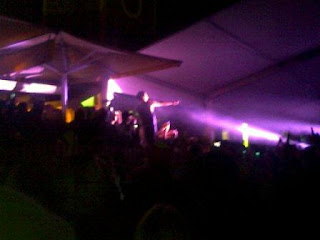 We arrived fashionably late and so heard only the tail end of the one man band who did a fairly good job of getting the crowd ready for the main event.  A few radio hits filled the musical gap in between the live acts, until finally our musical palate was cleansed by the deep voice of Johnny Cash walking the country line before the main event commenced.

And the band played.  The theme of this concert was the best of each album, starting at the beginning of Shihad's back catalogue and coming, two or three songs at a time, to their most recent releases.  The first few tracks were very heavy in their metal content, but as the years flew by, the songs mellowed (somewhat) and became (to me) a bit more recognisable.

Sure, some of the die hard Shihad "purists" may have left after those first few thrash songs, but I chose to think that they had actually stayed behind and were instead in a constant cycle of going to the bar, picking a beer, going back into the crowd, quickly finishing the beer, and then repeating themselves for the rest of the night.  Well, that was the impression I got when I saw the same people emerge again and again from the crowd to head off to procure an alcoholic beverage - but then, this was a Hutt concert.

Jon Toogood was having a blast fronting the band, or so he yelled loudly and with an f-bomb in almost every utterance.  At one point, he disappeared from the stage and materialised amongst the audience, a woman next to him filming his every angle with her cell phone and barely managing to hold herself back from reaching out to stroke his buttocks.  The crowd went wild with this magical trickery, and we all kept a beady eye on him as he made his way back to the main stage, where the crew had taken the opportunity to change the backdrop whilst the lead singer was away.
A tribute song to Jon's f****n parents and the arrival of the police signalled the impending end of the musical experience, my chronometer telling me that the local residents were going to give Shihad until 11pm to finish up.  That being the case, there were no encores or rowdy after parties.  Instead, the band finished up their last song, quickly wrapped up the night, and then it was time to leave.

The end of the music was a relief in a way.  Not because I disliked the music, far from it: I had thoroughly enjoyed it and, near the back, the sound level was actually really pleasant, being loud enough to make meaningful conversation close to impossible but not so loud as to cause brain haemorrhaging.

No, my relief came in that the young lady who danced with all the grace and poise of a wounded kangaroo on crack would finally stop bumping into me (and every other male in her vicinity) as she stumbled ungracefully in what she claimed was to the beat of the music.  She was actually a pretty attractive and probably illegally young lady, and she was obviously very friendly even if a rather slappish kind of way - though probably, when sober, she was a bit less so.

At any rate, battered body aside, the bruising did not detract from the spectacle in the slightest.  Shihad put on an amazing concert, and it was great to attend a friendly, open and unpretentious concert, though still very polished and professionally staged.  I am not going to say that I had a road to Shihad conversion or anything, as I was not really tempted to get their album (well, a little), but it was a great night out and I would gladly do it again - with steel capped shoes to ward off uncontrolled gogo dancers...

Verdict:  Shihad brought their A game and hopefully had as much fun as the audience did.  The small venue and minimal effects made the whole event a lot more intimate (and the booze very accessible), but that did not detract from the incredible professionalism of the musicians and the staging.  And parking was great too.  7.5 pacifiers out of 10.