The Case for Cats Amongst the Fishes

A few people had reservations when I suggested the documentary Catfish as the movie of the week.  The synopsis paints a picture of discomfort caused by the revelation of human frailty, much like the Office, though this one promises to be real. And let me say that those reservations were completely justified. 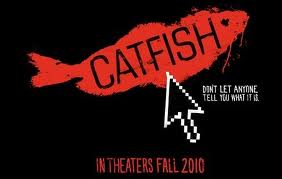 The basic premise is this: Nev, a New York photographer, goes to meet the one of the people that he has befriended on Facebook.  But is she all she appears to be via the wonder of the internet?

As you can probably guess, there are a few speedbumps on the way – otherwise, it wouldn’t be a terribly interesting documentary.  The fact that Nev is not always terribly likeable is, I think, a nice balance to the fact this is his story about the people he meets and so, for the most part, he is considered the “hero”.  On the flip side, the people he encounters may not have been entirely truthful, but it is hard to find them completely unsympathetic.  And I will say no more on it, as I think that I have already given too much away.
Let’s face it: there are some weird and wacky people on Facebook (and the blogosphere I am sure) who will say just about anything, and some of it might just be that they are crazy people in real life and some of it might be that they have an active imagination and have no qualms about making their fantasy life appear to be their reality when no proof is required.  Look at World of Warcraft.

Catfish tries to peer behind the electronic veil about the people who we might only fleetingly know, only tangentially have encountered, and who may for all we know be a bearded tattooed man lurking behind the image of a school girl with blonde pigtails,  Nev employs his own deceptions to try and lift (or should that be degauss?) that veil.  It’s all very duplicitous, but then, again, that makes for a riveting documentary.
It’s an indication of how important the whole social network thing is when the final “facts” roll, and Nev is credited with having over 700 Facebook friends.  As that flashed before me, I questioned the bearing that the number had on anything that had come before.  The number of Facebook friends in and of itself does (in some circles) lend an aura of status.  But, as this film kind of proves, how much do people know about the Facebook friends they have?  Do they actually know them at all?
Verdict: It is hard to write too much about this movie without giving all of it away.  Just summarising what its about gives away the major twist, but it’s the nature of those turns that have to be seen (and so should not be explained away here).  Suffice to say, Catfish is definitely a hard film to watch, exposing as it does what the freedom of the anonymity of Facebook can provide to some people, and that while it can make the world a smaller place, that does not mean everyone on Facebook is living on the same planet.  7 Friend Requests out of 10.

As an aside (another one!), John Clark and co continue to be completely hilarious and depressing in their view on reality.  Thanks to d3vo for pointing this little gem out.